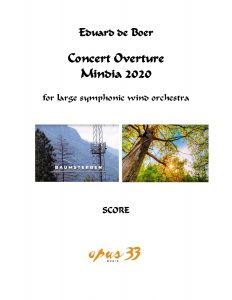 In this Concert Overture Mindia 2020, I have made use of thematic material from an earlier composition, entitled Mindia. When I started with the actual composing, the first signs of spring became noticeable, along with the first signs of a possible ‘pandemic’. As I am living in a small and beautiful village, surrounded by nature, both elements became sources of inspiration for this work, which in a sense is a follow-up on an earlier piece, entitled Coming to Light, which I wrote in 2015.

Mindia is the hero from the epic poem The Snake Eater by the Georgian poet Vazha Psavela (1861-1915). Being the leader of his people somewhere in Northern Georgia, he has received the psychic gift of being able to understand the voices of nature.

The composition’s structure is a free adaptation of a sonata form, albeit that the First Theme section is the more melodic one, contrary to the Romantic tradition which implies that the Second Theme is the Gesangsthema. In order to end the composition with this melodic (and heroic) theme, the Recapitulation is inversed. As a result, the structure is an overlap of six movements and one umbrella sonata form. Here is an overview of the six parts:

I. Spring Awakening (Introduction)
Nature is awakening. The first flowers appear, birds start to sing, frogs and crickets can be heard, etc.
II. Enter Mindia (Exposition, First Theme)
Mindia is welcomed with joy by all animals, trees and plants.
III. Panic and Grief (Exposition, Second Theme)
Suddenly, the animals, trees, plants, and also Mindia himself, feel a worrying sickness in the air. Birds are dying while flying and falling out of the air, trees and plants are beginning to wither (https://www.youtube.com/watch?v=LjT-HmuzYPg, https://www.youtube.com/watch?v=DSt6WuyMvSg & https://www.7sky.life/new-insights-and-revelations-5g-australian-fires-and-more/). The whole of nature begs Mindia to find out what is happening and to help.
IV. Agitation (Development Section)
Back home, Mindia is informed about both a so-called ‘pandemic’ and about a new type of microwave radiation being let loose on the world population. He hears things like: ‘All citizens need to be vaccinated, without exceptions.’ ‘No mass gatherings until mass vaccinations.’ ‘Please snitch on your neighbour and report him to the police if he leaves the house. In this case, snitching is good and will be rewarded.’ ‘Authorities may have to enter homes and remove family members, presumably by force.’ (https://www.facebook.com/sloan.bella.98/videos/vb.100008990262255/2277679575875029/?type=2&theater) Thanks to his psychic gifts, Mindia immediately understands what is actually happening (https://childrenshealthdefense.org/news/5g-the-big-picture/) and he starts to inform as many people as he can, imploring them to wake up to the impending danger.
V. Attack (Reversed Recapitulation, Second Theme)
The globalists, reinforced by the military and the police, start acting upon what they have threatened to do. However, thanks to Mindia, many citizens have by now become aware of the actual evil plans behind the facade of civilly formulated words. They start uniting and resisting.
VI. Victory (Reversed Recapitulation, First Theme)
The people of the world are victorious and the globalists are being stripped of their power.

At the moment of writing, what has actually happened is everything up to the fourth movement and the beginning of the fifth. The last one and half movements are a product of my wishful thinking. It is certain that in the end, the good will always be victorious. I do hope this will be soon.