In 2016, I started an experiment. I wrote the composition March of Iskahdar-Khan, in two versions: one for wind band and one for fanfare orchestra. Every person or organisation can become a co-commissioner of either version of this work, by donating; in this particular case, € 150. In return, the person or organisation will be mentioned in the score as a co-commissioner and will receive PDF material of the score and the parts for free. If the experiment succeeds, I will write more compositions on this basis.

Below follows more information about the composition in question. If you are interested in becoming a co-commissioner, please contact me.

Versions for Wind Orchestra a and for Fanfare Orchestra 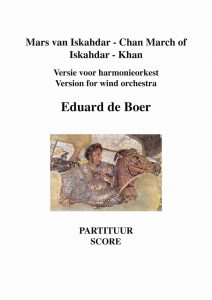 This composition is a crowdfunding project. For € 150, you and / or your orchestra can become one of the commissioners of either version of this composition: you will then be mentioned in this preface to the score as a co-commissioner. If you feel like participating, please contact me.

INTRODUCTION
The point of departure for this composition has been Uzbek traditional music. Before starting composing, I immersed myself in the book Ocherki po istorii muzyki narodov SSSR (Essays about the music history of the peoples of the U.S.S.R) by Viktor Beliaev, edited by Mark Slobin. In this book’s chapter about Uzbekistan, I encountered the following fascinating march theme:

In folk tradition, this march was called March of Iskahdar-Khan. In Central Asia, Iskahdar-Khan was the name given to Alexander the Great. This somehow inspired me. In addition, I transcribed a few traditional Uzbek dances from recordings on YouTube. Here is an excerpt from one of them:

The total of these musical ‘ingredients’ led me to write a composition with a rather simple, but at the same time dark and menacing atmosphere. After a relatively slow introduction, the music becomes ever fiercer in a series of successive waves, until a climax is reached, culminating in a few bars of solo percussion. This is followed by a lamenting variant of the march theme, after which the composition reaches a stark conclusion.