In preparation: Bells of Paradise, Ballet after a Japanese Fairy Tale, op. 95 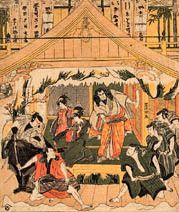 To be composed for wind orchestra Sint Jan, Wierden and their conductor Egbert van Groningen, in collaboration dancers from the  Vooropleiding Theaterdans Kottenpark and the talent class Kaliber Kunstenschool in Almelo, the Netherlands, both under the guidance of Nada Belada. This is the preliminary scenario (there may be alterations during the process of composing):

[1] Spirits in Japanese classical literature and folk religion that are said to do things like possess individuals and make them suffer, cause disease, or even death.