Записки сумасшедшего (Diary of a Madman), opera in one act after Gogol (unfinished) 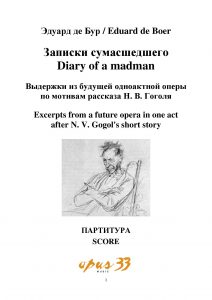 Cover picture: Illustration of the novel “Diary of a Madman”) by Ilya Repin

It has for many years been a dream of mine to turn Gogol’s short story Diary of a Madman into a one-act opera for only one singer and orchestra; an opera which will in this respect be comparable to Poulenc’s La Voix Humaine and Schönberg Erwartung.

Gogol’s story depicts a low-level clerk’s gradual descent into madness, eventually leading to his confinement in a mental asylum. Starting with a journal entry dated as The Year 2000, 43rd of April, the second half of the work chronicles the worsening of his condition, starting with the moment that he arrives to the conclusion that he is the new king of Spain. The story ends with his total breakdown, due to the brutal way he is being treated in the asylum.

What makes the story so well suited for opera in general is the gradual unfolding of the drama towards its inescapable climax. Furthermore, Gogol’s own words can directly be turned into a libretto, as it is possible to abridge Gogol’s text by ca. 60% while still retaining nearly every step of the worsening of the protagonist’s mental condition.

And besides all this there is something that makes the story extremely interesting to be turned into a 21st century opera. We now have an incredible amount of musical idioms and atmospheres at our disposal that can be used to depict everything ranging from the harmonious and tonal to the disharmonious and atonal. This implies that the madman’s gradually increasing mental instability can be musically underlined by music that is becoming more and more atonal and dissonant during the course of the opera; the gradual increase in dissonance being alternated by moments where a general mood of sad solitude is musically depicted, illustrating the madman’s troubled soul. Gogol’s Diary of a Madman is just waiting to be transformed into precisely such an opera. In my estimation, this is nothing short of a golden idea, the realisation of which, if carried out well, cannot fail to have a considerable impact.

Thanks to having been offered an amount of money to make a start, I have been able to draft  a concept libretto, consisting of 19 diary entries or scenes, and to set a number of these to music. This score consists of the beginning of the opera, followed by scenes 2, 4, 5, 9, 10 and 11. From the very start of the music, the music reflects a certain degree of mental instability. In scenes 9 – 11, it can be heard that this instability has increased: the music has become either atonal or still tonal, but in a rather ‘unhinged’ way. Scene 12 is the abovementioned Year 2000, 43rd of April entry, where the madman has come to the conclusion that he is Spain’s new king. From this moment on, the music will be yet more disharmonious than before, and very eerie; to give a bit of an idea: somewhat like Rodion Shchedrin’s music for the ballet The Seagull. The last scene, however, depicting the hero’s total breakdown, will be very emotional and tragic.

There are two songs of mine that play an important part in this opera. The first one is a song called Der Wahnsinn (The Madness), taken from my song cycle Lieder und Tänze der Nacht (Songs and Dances of the Night), which can be found on Youtube. The other is called Lyubovnaya Pyesnya (Love Song), on a poem by Nikolai Nikolev. The beginning of this last poem is quoted in Gogol’s story, and I set it to music just before embarking on the music for the opera itself, as to have the necessary themes connected with the protagonist’s love for the director’s daughter.

In the music composed so far, I haven’t made much use of brass and percussion. I saved that for later on: there will be a lot of – mostly muted – brass and mysterious sounding percussion in the second half of the opera, from the 43rd of April on….

Trumpet I, II
Horns I, II in F
Trombones I, II
Tuba