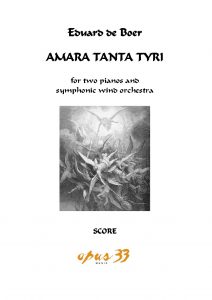 Several years ago, the brothers and piano duo Stefan and Martijn Blaak suggested me to write a composition for them for two pianos and symphonic wind orchestra. Eventually, this resulted in a benign grant with the euphonious title Werkbijdrage Muziekauteur (Work Contribution Music Author) from the Dutch Fonds voor de Podiumkunsten (Fund for the Podium Arts).

The starting point for the composition is the tenth song from my choral song cycle Cantica Aviditatis (Songs of Greed), a song called Amara Tanta Tyri. This title is an ancient exorcism spell, allegedly with the power to expel demons. Not only did the thought appeal to me to compose a piece in the vein of Schubert’s Wanderer Fantasie – in other words, a song as a point of departure for an instrumental work – but besides this, the concept of expelling evil from the world has been a source of inspiration for me for several years now. To give one telling example of evil existing in the present-day world: fortunately, many people are aware now that the official 9-11 story can’t possibly be true, and the idea that a small group of wealthy and powerful people actually have been able to concoct such an evil plan, to have it executed, to blame the attacks on innocent people that had nothing to do with it, to somehow create the illusion that there would be some sort of relationship with Saddam Hussein and Iraq, subsequently to go to war with this country, thereby making the perpetrators even more wealthy and powerful, while at the same time manipulating the world population into thinking that the laws that have come into effect as a result of their evildoing could solve any of the problems that were created by the wealthy and mighty criminals in the first place; all this is mind-boggling almost beyond comprehension. And so is the realisation that the evildoers are still walking free today, having all the freedom and resources in the world to concoct yet more evil schemes. And indeed from here it is only a small step to things like dark secret societies, satanic ritual abuse, etc. Anyway, the lighter side of all this (if you can call it that) is that it is a goldmine of inspiration of the darker type, at least for me.

The act of expelling such unspeakable evil reminds me of the ultimate battle between light and dark in what is described as the end times in the biblical Book of Revelation. I chose the following quotes from its 20th Chapter as mottos for the two movements of the composition:

Unsurprisingly, the first movement describes a battle between dark and light. The thematic material comes from the abovementioned song from the Cantica Aviditatis cycle, complemented by an ominous sounding rendition of the dies irae plainchant, and the melody of the first Cantica Aviditatis song, where the demonic power of Babylonian money magic is the central theme. At the end of the movement, one hears the crumbling of the satanic power structures, leading to their demise at the start of the second movement. Here, we encounter the very same themes as in the first movement, but metamorphosed into music that now sounds peaceful and harmonious – even the dies irae melody – while gradually growing in strength, all the way to the triumphant ending of the composition.

Also the formal structure of both movements is similar: an exposition of the musical material is followed by an expanded version of the same. In the first movement, this expanded version can be subdivided into a repetition of the exposition, now for pianos and orchestra (rehearsal numbers 4 to 7), a development section (numbers 8 to 17) and a reprise with coda (numbers 20 to 24). In the second movement, the expanded repetition of the material (starting at rehearsal number 30) doesn’t allow for such a subdivision, because of the serenity of the overall atmosphere. In order not to disturb this atmosphere, the structure has been kept very simple, like in the generally peaceful last movement of Beethoven’s last piano sonata, opus 111.