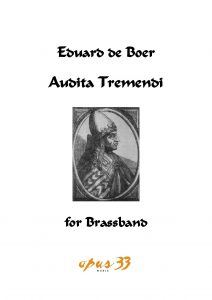 Audita Tremendi is the title of a papal bull issued by Pope Gregory VIII on October 29, 1187. It was written in response to the utter defeat of the Kingdom of Jerusalem at the Battle of Hattin on July the 4th of that year and the capture of the ‘True Cross’ (a piece of wood at the time believed to be from the cross upon which Jesus was crucified) by Saladin’s Muslim armies. Its title consists of the first two words of the text, which begins as follows:

The bull is a passionate plea for a new crusade, and the eventual result became known as the Third Crusade, with Richard the Lionheart, Philip Augustus and Saladin as the most famous protagonists. The intensity of both the text and of the events that had preceded it and were to follow inspired me to dedicate a composition to this subject. It has become a composition in four continuous movements:

I. Turba (Turbulence)
The news that a large majority of  Crusader forces was killed or captured during the Battle of Hattin results in chaos and turbulence, everywhere in Europe. This initially turns to grief.

II. Crucifigat Omnes (May all of them be crucified)
Now grief has turned to anger and lust for revenge. The Medieval song Crucifigat Omnes – part of the Carmina Burana collection – is an example of the atmosphere that pervaded Europe during the times of the Third Crusade. Here are the first and the last lines:

The second time the melody of this song appears, it is merged with march-like music, that ultimately takes over, symbolizing a march all the way to the ‘Holy Land’. Finally, the port of Acre is reached and Saladin’s forces are awaiting the Crusaders.

III. Praelium (Battle)
Depicting the Battle of Acre, in October 1189, during which the Christian forces endured heavy losses, but which did not end in a decisive victory for any of the parties. The ensuing Siege of Acre lasted almost two years and was horror beyond imagination. Especially during the winter of 1190, where thousands of Christians died, due to lack of nutrition and large-scale epidemics:

IV. Hiemali Tempore (In Winter Time)
Scenes of mournful desolation alternate with music depicting gradually increasing frenzy. The melody from the medieval song Hiemali Tempore, also from the Carmina Burana collection, forms the basis of this movement. Towards the end, there is a ray of hope amidst all the sorrow and grief: a glimmer of hope that the day will come that there will be no more violence and hatred, both in the ‘Holy Land’ and elsewhere. But then frenzy takes over again, bringing the composition to an energetic conclusion.