Bells of Paradise, Ballet after a Japanese Fairy Tale, op. 95 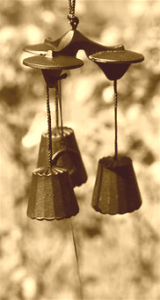 In 2019, I chanced upon a book entitled Märchen von Musik und Tanz (Fairy Tales about Music and Dance). I purchased it out of curiosity and thus found the Japanese fairy tale Das Glöckchen (The Little Bell). I immediately felt attracted to it and by the idea to turn it into a ballet.

As chance would have it, dance teacher Nada Belada had just made a beautiful choreography to a composition of mine and symphonic wind orchestra ‘Sint Jan’ from the Dutch town of Wierden had just performed another piece of mine. I approached both Nada and Egbert van Groningen, conductor of Sint Jan, with my idea, and both reacted favourably to it. And so did the advisory committee of the Dutch Fund for the Creation of Arts, who financed the commission that Sint Jan gave me to write this ballet.

During the process of devising the scenario and the choosing of Japanese folk melodies, I was greatly helped by my friend Shu Kanezaki. He first of all explained to me the tradition of the so-called furin, one or more little bells with a strip of paper with a beautiful text attached to them. When the composition was finished, he ordered the furin that are prescibed for it and sent them to me., Furthermore, in the course of our correspondence, the idea arose to add to the scenario three so-called mononoke: spirits in Japanese classical literature and folk religion that are said to do things like possess individuals and make them suffer, cause disease or even death. And, last but not least, he explained to me the background of a multitude of Japanese songs and dances. In short: he provided me with the knowledge that was needed to give the ballet the necessary touch of authenticity. It is with gratitude that I dedicate this composition to him.

The scenario, as it has become, follows below. For the music, I made use of various Leitmotifs that recur throughout the piece; motifs that are meant to highlight whom- or whatever they refer to, each time they sound. Here is a survey of them, in order of appearance. Please be aware that many of these motifs alternate between binary and ternary meters:

Doujan (‘What can I do?’), sad version: Mohej before his transformation

Doujan (‘What can I do?’), joyful version: Mohej after his transformation

I composed this ballet between April and October of the memorable year 2020. Writing this music worked as an antidote to the depressing global occurrences and developments, and therefore gave me even more pleasure and fulfillment than it would have done otherwise.

1. Introduction. The Monk
A beach, a calm sea in the background. The porch of a temple is revealed, with an old monk sitting on it. Attached to the roof over the porch are three ‘furin’, Japanese wind bells. A broad strip of paper with beautiful Japanese characters written on it is hanging underneath each bell. A gentle sea-breeze makes the papers move and this makes the bells ring softly and sweetly. The old monk is sitting on the porch, looking out at the ocean and smiling contentedly. The temple and the monk disappear. A screen rises to reveal…

PART I
2. Mohej and the Mononoke. Mohej, Three Mononoke[1]
… the pharmacist Mohej, in his shop. He is feeling very depressed. Unbeknownst to him, he is plagued by three mononoke, invisible vengeful spirits or ghosts that curse people until they get sick or die. This causes him to feel depressed and ill all the time.

3. Mohej’s Journey. Mohej, The Three Mononoke, Passers-by
This can’t go on! He makes up his mind to visit the monk and ask his advice. He sets off. On his way, he meets various passers-by. His mononoke follow him.

4. Mohej’s Plea. Mohej, The Three Mononoke, The Monk
Having arrived at the monk’s temple, he sees the old man seated contentedly on his porch and he hears the soothing ringing of the silver bells. He realizes in a split second that these little bells would make him happy as well if he could sit there and listen to them. And indeed the mononoke hate the sound of the chimes. Mohej beseeches the monk to lend him the bells, just for a single day. The gentle monk grants him his request, adding “But do not forget to bring them back tomorrow morning.” While the mononoke are cowering in the background, Mohej reverently thanks the monk and promises to bring back the bells the next day.

5. Mohej’s Return Home. Mohej, The Three Mononoke, Passers-by
Mohej returns home with the bells, full of impatience. Again, he meets some passers-by. His mononoke follow him at a distance.

6. First Dance of Joy. Mohej, The Three Mononoke
Having arrived home, Mohej hangs the little chimes over the porch. They begin to ring. The mononoke are now definitely chased away by their sound. Mohej, however, becomes so light-hearted, and the world suddenly seems so beautiful that he begins to dance.

PART II
7. The Monk’s Impatience. The Monk, Mononoke 1
Same scenery as in the beginning, the next day. The old monk is seen, waiting for the return of the pharmacist with his furin. Gone is his peaceful good mood. He is gradually getting impatient. Still, Mohej is nowhere to be seen. Instead, one of the mononoke now enters, frustrated and vengeful for having been chased away by the bells. Stealthily, he approaches the old monk, who is becoming more and more impatient. The mononoke now stays around the monk, depriving him of what was left of his good mood. Feeling depressed, the old monk waits and waits. Time passes…

8. Taro and Jiro are Called. The Monk, Mononoke 1, Taro, Jiro
Finally, the monk has had enough. He calls his disciples Taro and Jiro. They come immediately. The monk orders them to go to the pharmacist and bring back the wind bells. Taro and Jiro promise to do so.

9. Taro’s and Jiro’s Errand. Taro, Jiro, Passers-by
They set off On their way to the apothecary, they meet some passers-by.

10. Second Dance of Joy. Taro, Jiro, Mohej
Just before the entrance to Mohej’s garden they stop. They hear the happy ringing of the bells. They enter the garden and are astonished to see the apothecary, dancing around with sleeves and laps flying in the air. They are transfixed by this sight. But then, all of a sudden, they become so happy, that they, too, begin to dance. The three of them feel completely in harmony with themselves and with each other. They all feel exuberantly joyful.

PART III
11. The Monk’s Sadness. The Monk, Mononoke 1, 2 & 3
Same scenery as in the beginning, late afternoon. Hours have passed. No sign of the pharmacist, nor of Taro and Jiro. Watching the calm sea now makes the old monk sad. As he is waiting, with the invisible mononoke encircling him, the other two mononoke, too, enter and start dancing around him. The monk can’t see them, of course, but he does sense them. He now becomes even more sad.

12. The Monk’s Journey. The Monk, The Three Mononoke, Passers-by
Finally, the monk has had enough. He goes on his way to the pharmacist himself. He meets various passers-by and he is being encircled by the three invisible mononoke. Having arrived before Mohej’s garden gate, he hears the soft ringing of the wind chimes. He passes through the gate.

13. Third Dance of Joy. The Monk, The Three Mononoke, Jiro, Taro, Mohej, Passers-by
What he sees hugely surprises him. He sees both his disciples holding hands with the apothecary, all three happily dancing. The mononoke panic and flee. The monk, meanwhile, is so astonished, that he stands frozen to the ground. But then, listening to the sound of the bells, his sadness vanishes. Hesitatingly, for the first time in his life, he begins to dance. The others gently take him by the hand and invite him to join them. Meanwhile, gradually more and more passers-by enter the garden. They, too, enchanted by the sound of the bells, begin to dance. General dance of joy.

[1] spirits in Japanese classical literature and folk religion that are said to do things like possess individuals and make them suffer, cause disease or even death.

Introduction and Part I: