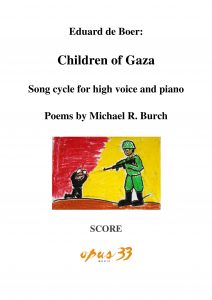 The full text of the poems can be read and / or downloaded here, together with introductory background information: Children of Gaza – Introduction and Text of the Poems.

The full score may be copied, shared and distributed freely. It can be downloaded here for free: Children of Gaza – Partituur met Voorwerk. It will be appreciated if information about performances and / or recordings of this cycle or part thereof is sent to hallo[at]eduarddeboer.org[1].

In 1976, I was 19 years old when I spent my summer holidays in Israel. I worked for three weeks in a Kibbutz, then travelled one week through the country. I very much enjoyed those weeks and have many beautiful memories of them. However, contrary to the expectations I had at the time, my fondest memories today have to do with Palestinians rather than Israelis. For instance, I vividly remember that, during my weeks in the Kibbutz, I was ordered to join a group that worked on a sunflower field in a nearby village, supervised by an old Palestinian man. He turned out to be the friendliest, mildest and loveliest person I had ever met. And I also remember hitchhiking somewhere, with a large backpack on my shoulders and a big camera hanging around my neck, when someone shouted at me, inviting me to come into his house; which I did. Maybe it was a naïve thing to do, especially for someone who obviously looked as much like a young and vulnerable Western tourist as I did, but I never regretted it. I was welcomed by a group of very friendly Palestinians, who offered me food and drink, and even showed me where the key to the house was hidden, so I could enter it at any time, whenever I wished. I had never encountered such hospitality before. These experiences formed a contrast to what I had learned at the Christian schools I had attended, where I had been told that Arabs were stupid heathens and that it was a good thing that God had finally returned the ‘Holy Land’ to his ‘chosen people’.

I never returned to Israel, but I did develop a fondness for Jewish folk melodies, which I incorporated into some of my compositions, for instance in my first symphony and in my Yiddish Suite for cello and piano. (Recordings of these compositions can be found on YouTube, under my pseudonym Alexander Comitas.)

It was many years after my visit to this country, that my Belgian friend André Posman, at the time an organizer of classical concerts, made me aware of the plight of the Palestinians and the lack of attention by the mainstream media for their dire situation. He offered me a book about the situation in the Gaza Strip, a book that among other things contained some poems. Slowly the idea began to take shape in my mind ‘to do something’ with this, at some point in the future.

Again, years later, this idea had developed to the point that I wished to compose a song cycle about Palestinian children in Gaza. By then, the Internet had become commonplace, so I began searching it for poems having to do with this theme. In doing so, I came across the name of an American poet, Michael R. Burch, who on his website www.thehypertexts.com has for many years been campaigning very actively for the Palestinian cause. I found his e-mail address and in January 2016, I finally decided to contact him about the idea of a song cycle. By then, the idea of a ‘storyline’ had become rather clear. I envisaged a cycle with two consecutive climaxes, one where a child’s family is shot by Israeli soldiers during a raid, and later another one where a child is killed by a bomb dropped by an Israeli plane[1]. I also had found a number of Palestinian folk songs on YouTube and I had purchased a CD called Lost Songs of Palestine. In this way, I had acquired a small collection of songs to which I could allude.

And then a miracle happened, or rather: a series of miracles. Michael not only gave me permission to use any of his poems I wanted, but also offered to write any additional poems I needed for the cycle. Furthermore, I could feel free to instruct him not only about the subject of each poem, but also about its length, its meter and form, and about certain melodies I would like to use. He turned out to be just the ideal collaborator to make the wish of composing a cycle like this come true!

And it didn’t stop there. I had proposed to Michael to make it a project extending over several years. I earn my income mainly by composing in response to commissions and I intended to write one song at a time in between them. But then, in February, I received an e-mail from Nelly, the widow of Christoph, a dear friend of mine who had sadly died a few months earlier, informing me that in his will he had left me and my wife an amount of money. I asked her if she would allow me to regard this amount as a commission fee for a Children of Gaza song cycle, and she liked the idea, because Christoph was the type of person who always stood up against injustice.

And on top of all this, against my expectation, I couldn’t start with either of both composition commissions I had at this time: for one of them, a scenario still hadn’t been written and for the other one I needed a detailed account of the technical level of the members of the performing band. So, suddenly and unexpectedly, I had the collaboration of an ideal poet, the money necessary to write the cycle, and also an unexpected and perhaps provident amount of time!

Michael and I decided to go for it the cycle rapidly progressed, until 2½ months later we reached the point that it was ready. Luckily, inspiration came abundantly, and during the whole composing process I had the feeling that everything was just falling into place automatically. To give an example: the impact of the fatal bomb at the end of the song In the Shelter turned out to be exactly at the Golden Ratio point of the cycle as a whole; something I had neither expected nor influenced consciously in any way. The whole experience felt to me as if ‘it just had to be’.

The Palestinian folk songs that are quoted or alluded to in the cycle are:

– Al-Yadil Yadi (My Carefree Ways). This melody appears right at the opening of the first song and it returns at various places throughout the cycle.

– A so-called Dabka, a Palestinian folk song and dance, dealing with the occupation of Palestine in 1948. This theme, too, is heard for the first time in the first song, and it, too, returns a number of times, throughout the cycle.

– Mouvasha Lamma Bada Yathanna, an ancient song of lament. Merely hinted at in the song For God’s Sake, I’m only a Child, it is clearly alluded to in the songs In the Shelter and Among the Angels.

– Hala Layya, a lullaby. The beginning of this melody appears for the first time in the song Mother’s Smile, reappearing in In the Shelter and Among the Angels.

Happy as the story of this cycle’s creation is, the plight of the Palestinians living in Gaza and the West Bank is far from happy. No parent would allow his or her own children to be subject to the dire circumstances under which the children born there are living, and this alone ought to be enough reason for everyone to want to put an end to the atrocities that have been going on far too long in this troubled region. Everyone who has access to the Internet can now read about this, for instance on Michael Burch’s website www.thehypertexts.com (search for the terms ‘Palestine ‘or ‘Nakba’) or can watch videos, for instance on Facebook pages like The Eye of Palestine or The Palestinian Information Center. No ‘Holy Land’ or text in Bible or Torah can justify how Palestinian children are treated on their native soil.