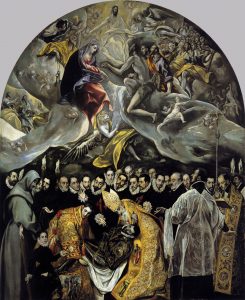 This composition is the result of a joint commission by the Concejalía de Cultura del Excmo. Ayuntamiento de Yecla and the Museo de Réplicas del Greco Regreco 400 to write a piece after El Greco’s wonderful painting El Entierro del Conde de Orgaz (The Burial of the Count of Orgaz), to be performed by the Banda “Asociación Amigos de la Música” de Yecla and their conductor Ángel Hernández Azorín, in the year 2014, the fourth centenary of the painter’s death. I feel very grateful to have been entrusted with a commission with such spiritual significance and I have tried my best to compose a piece worthy of the occasion, the painter and the painting.

The painting itself depicts a miracle that allegedly took place in 1312. In that year, a certain Don Gonzalo Ruíz, native of Toledo, and Señor of the town of Orgaz, passed away. He was a pious man and a philanthropist, who, among other charitable acts, left a sum of money for the enlargement and adornment of the church of Santo Tomé (El Greco’s parish church). According to the legend, at the time of his burial, Saint Stephen and Saint Augustine descended in person from the heavens and buried him by their own hands in front of the dazzled eyes of those present.

A number of Gregorian melodies have been used to represent various personages on the painting, as will be explained in detail below. A number of players are meant to play these melodies offstage, from a more or less high position, in accordance with the level in which they are depicted on the painting. The composition’s structure is as follows:

I. Himno (Hymn)
A jubilant Introduction, marvelling at the miracle depicted in the painting as a whole, based on the Latin words Magna et mirabilia opera tua, Domine Deus omnipotens (Great and marvellous are your works, Lord God Almighty!

III. San Esteban y San Agustín (Saint Stephen and Saint Augustine)
The sudden descending of the two saints is illustrated by a abrupt change of atmosphere, heralded by the entrance of soft organ and celesta sounds, followed by Gregorian chants representing both saints, played offstage. First, the bassoon plays Lapidaverunt Stephanum, et ipse invocabat Dominum, dicens: ne statuas illis hoc peccatum (They stoned Stephen, and he called upon the Lord, saying: don’t hold this sin against them). Then the alto saxophone follows with Augustine, lux doctorum, firmamentum Ecclesiae (Augustine, light of the wise, firmament of the Church). Then the procession song is repeated, now transfigured in the major key, alternated with both Gregorian chants in counterpoint.

IV. El Ángel y el Alma (The Angel and the Soul)
Together with the Gregorian chant Beatus vir (Blessed man), played by the tenor saxophone and the oboe, the soft celesta & organ sounds return, and also the Magna et mirabilia opera tua theme from the Introduction is repeated, now softly. Ascending celesta & organ sounds then depict how the Count’s soul, helped by an angel, rises up to Heaven; as can be seen in the painting’s central section.

Then the atmosphere intensifies with broken chords in flutes and oboes. To the abovementioned melodies (Mary now being represented by the E flat Trumpet) are now added:

Finally, the Gregorian melodies representing Mary, St. John, Peter and Paul and St. Thomas reappear, followed by those representing St. Stephen and St. Augustine, after which a gradual build-up follows, combining the beginning of the Jesus motive with the In Paradisum melody; a build-up leading to:

VI. Himno (Hymn)
The jubilant Magna et mirabilia opera tua theme from the Introduction returns with full force, now reinforced with glockenspiel, vibraphone and chimes. When the music finally starts to relax, the motives belonging to the saints Stephen and Augustine and to Jesus are heard one last time. After a final reminiscence to the transfigured Procession melody, the music comes to a quiet and peaceful ending.

This documentary, El Sonido del Lienzo (The Sound of Canvas), by Álex González y Adrián Ortín, is about the history of the Asociación Amigos de la Música de Yecla, its Banda Sinfónica and their conductor Ángel Hernández Azorín, about the coming into being of my composition and about the wonderful collaboration with the Banda and the eventual premiere.