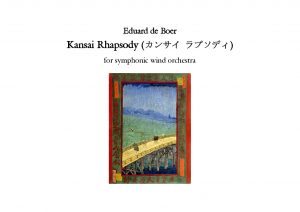 Commissioned by the Dutch Fund for the Podium Arts
Based on an idea by Koji Kakutani
Composed for and dedicated to Harmonie St. Petrus en Paulus, Wolder – Maastricht and their conductor Matty Cilissen

Official premiere: March 10, 2019, by the Machikaneyama Wind Orchestra, in Osaka.

The idea to compose a piece based on folk music from the Kansai region in Japan was suggested to me in 2012 by Koji Kakutani, artistic director of the Kinki University Band from Osaka. After the terrible tsunami in 2011 in the Tohoku region, I wrote an Elegy for Tohoku, based on one folk melody each of the three prefectures of this area: the Fukushima, the Miyagi and the Iwate prefectures.[1] After this piece was performed by the Kinki University Band, Mr. Kakutani asked me if I could write a composition for the 50th anniversary of his band, in 2013, and he sent me sheet music and links to audio files of folk melodies from the four prefectures of the Kansai region: the Wakayama, the Nara, the Hyogo and the Osaka prefectures.

Unfortunately, it turned out that I didn’t have the opportunity to compose such a piece for the occasion of the anniversary, but I found the idea to write a Kansai Rhapsody based on folk melodies from each of the four prefectures quite appealing, so the idea never left me.

During the 2013 World Music Contest for wind bands in Kerkrade, Harmonie St. Petrus en Paulus from the neigbourhood Wolder in the Dutch town Maastricht performed the Elegy. Some time after this concert, I suggested the idea of a Kansai Rhapsody to the orchestra’s manager Jo Haesen and conductor Matty Cilissen. Both reacted favourably and eventually this resulted in a commission by the Dutch Fund for the Podium Arts.

The composition consists of a Prelude, followed by four consecutive movements. The sheet music that Mr. Kakutani sent me often differs considerably from the sound files he sent me links to, and I made free use of both types of sources, since I found both of them attractive:

In this composition, I didn’t try to use the Japanese melodic material in a dogmatically ‘authentic’ way. I rather felt attracted to the idea of letting the beautiful Kansai folk melodies inspire my imagination, while leaving intact the typical ‘Japanese’ atmosphere that they emit; much like my fellow countryman Vincent van Gogh did when he made his famous paintings inspired by Japanese art.

Illustration on cover: Bridge in the Rain, after Hiroshige, by Vincent van Gogh