Let There Be Light Again, A Stairway to Heaven, for brass, percussion and unison chorus ad libitum, op. 94 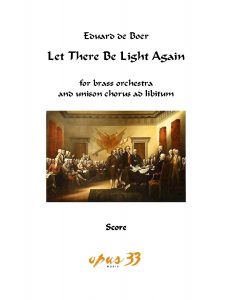 The famous words Let There Be Light Again are taken from the so-called Speech of the Unknown Man, on July 4, 1776, during an assembly dedicated to signing the Declaration of Independence, which would declare America to be a free country and no longer a colony of Great Britain. In the words of an eye-witness:

In the old State House in Philadelphia, a group of men were gathered for the momentous task of severing the tie between the old country and the new. It was a grave moment, and not a few of those present feared that their lives would be the forfeit for their audacity. In the midst of the debate a fierce voice rang out. The debaters stopped and turned to look upon the stranger. Who was this man who had suddenly appeared in their midst and had transfixed them with his oratory? They had never seen him before, none knew when he had entered; but his tall form and pale face filled them with awe. His voice ringing with a holy zeal, the stranger stirred them to their very souls. His closing words rang. through the building, ’God has given America to be free!’ As the stranger sank into a chair exhausted, a wild enthusiasm burst forth. Name after name was placed upon the parchment: the Declaration of Independence was signed. But where was the man who had precipitated the accomplishment of this immortal task — who had lifted for a moment the veil from the eyes of the assemblage and revealed to them a part at least of the great purpose for which the new nation was conceived? He had disappeared, nor was he ever seen or his identity established. 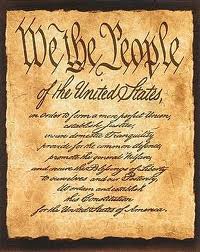 The electrifying speech stirred the reluctant signers of the Declaration of Independence into action. They all overcame their fear and enthusiastically signed the document. Legend has it that the ‘Unknown Man’ was in fact an apparition of Count of Saint Germain, according to some an spiritually highly advanced so-called ‘ascended master’. Whoever he was, he ended his now famous speech with these words:

God has given the American continent to the free–the toiling millions of the human race–as the last altar of the rights of man on the globe–the home of the oppressed, forevermore!

When conductor Lute Hoekstra asked me to write a composition having to do with America for the Dutch Regimentsfanfare ’Garde Grenadiers en Jagers’ (Regiment Fanfare Gard Grenadiers and Hunters), I found inspiration in this wonderful story. I imagined a composition akin to Edward Elgar’s great Pomp and Circumstance March Nr. 1, with its famous Trio section tune, to which Arthur C. Benson added the lyrics of Land of Hope and Glory. I slightly altered the closing words of the Speech of the Unknown Man, as to add meter and rhyme:

To these words I composed a tune for the B section of my composition. As is also the case in Elgar’s March, my composition has a lively A section. In this part, the opening of George Gershwin’s song A Gateway to Paradise is quoted, next to the Let there be light again motive.

In the closing section of the score, a Unison Chorus part has been added, which can either be sung, by a choir and / or by the audience, but which can also be left out.