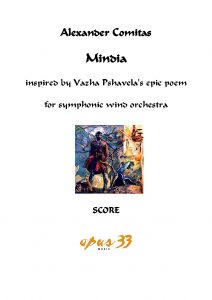 Commissioned by the Dutch Fund for the Podium Arts NFPK

During the summer holidays of 2013, while in Georgia for the first time, I chanced upon a number of poems of Vazha Pshavela, an outstanding Georgian poet, born in the second half of the nineteenth century in the Northern Caucasus. I felt immediately attracted to a poem called The Snake Eater (1901), about the tragic fate of its hero Mindia, in the Northern mountainous region of Khevsureti. I started investigating and transcribing Khevsur folk music, which I found to possess the same stark beauty as Pshavela’s poem.

After the summer holidays, I approached the wind orchestra Koninlijke Harmonie Mheer and their conductor Fried Dobbelstein with the ideas to write a composition, inspired by the Mindia story, for symphonic wind orchestra. Just before the holidays, this orchestra had given an outstanding performance of my Caucasian Epode, during the World Music Contest WMC that takes place every four years in the Dutch town of Kerkrade. Fried and the orchestra reacted positively to the idea and eventually, in the spring of 2014, our combined efforts resulted in a grant from the Dutch Fund for the Podium Arts NFPK, which enabled me to start with the actual composing.

This composition deals with the first section of the poem, starting with Mindia in captivity and ending when he has returned to his people. It is subdivided in seven continuous movements:

I. Captive
For twelve years Mindia has been held captive by the Kajis, a tribe consisting of evil sorcerers. He feels sad and lonely, missing his parents, kin and cherished friends and his beloved land of Khevsureti with its snow-capped mountains, its winding paths and murmuring streams. With time he has lost all faith and hope of ever seeing his homeland again. He longs to find relief in death from his miseries and pain.

II. The Cauldron
A cauldron full of serpent’s meat, the Kajis’ favourite dish, now attracts his attention. Mindia believes that if he will eat of it, it will turn to poison in his veins and by killing him free him from his captivity. Finally he picks up enough courage to eat a piece of the loathsome meat.

III. Voices of Nature
But instead of dying something entirely different happens to him. He finds that he can suddenly understand the language of all nature’s creatures: of birds, plants, trees, animals, streams and rocks.

IV. The Kajis’ Fury
The Kajis are furious that Mindia has discovered the secret of their magical skills. But they know they now have lost their power over him.

V. Return Home
Being now skilled in the Kajis’ magic, Mindia can simply leave them. He returns to his tribe in Khevsureti, where his family and friends are overjoyed to see him back.

My eventual aim is to cover the whole of Pshavela’s great poem by writing four more Mindia compositions.

There is also a version for symphony orchestra and also one for symphonic wind orchestra, both called Dance of Celebration.

Dedicated to the Koninklijke Harmonie Mheer and their conductor Fried Dobbelstein

There is also a version for symphony orchestra and also one for brass band, called Festive Dance.

There is also a version for symphonic wind orchestra and also one for brass band, called Festive Dance.