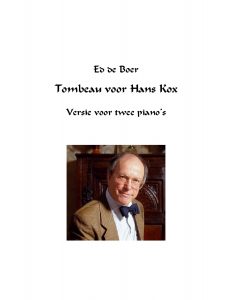 This short tribute to my former composition teacher Hans Kox, which I composed for and played during his funeral service,  connects the opening bars of his opera The Portrait of Dorian Gray with motifs of two medieval songs from the Carmina Burana Codex, namely Celum non Animum and Procurans Odium. The central theme of both songs is stabilitas, the Latin word for steadfastness, cannot be taken off its course, not even by negativity from outside. This was a central theme in Hans’ life, and to his steadfastness we owe the above-mentioned exquisite opera and all his other music.

The piece was originally composed for piano solo. I wrote this version a bit later.