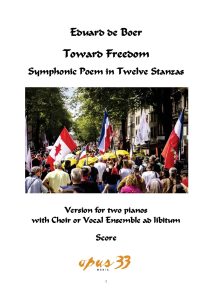 As one of the persons preferring not to take any of the vaccines that are currently being pushed, I followed the developments surrounding the so-called Freedom Convoy, early 2022 in Canada, with more than average interest. As I see it, something happened there and then, that was quite surprising and that went against the visions of those who were at the time pushing very hard for everyone to ‘take the vaccine’.

At the start of 2022, I could not avoid noticing that people like me were being heavily criticized by government officials all over the world. For instance, in my country, the Netherlands, health minister at the time Hugo de Jonge declared he had ‘zero understanding for refusers[1]’. The French prime minister, Emmanuel Macron, went even further by stating: ‘Eh bien, là, les non-vaccinés, j’ai très envie de les emmerder’ [2] which translates to ‘Well, with regard to those non-vaccinated, I really feel like pissing them off (literally: shitting on them)’.

But the prime minister of Canada, Justin Trudeau, surpassed all others by calling the ‘non-vaccinated’ ‘extremists who are often misogynists and racists’[3]; in doing so, Trudeau is the only person in the world who has ever accused me of things like that. [4]

To add to the overall picture, at the beginning of 2022, Canada was among the countries with the strictest corona measures in the world. Such were the general circumstances when, on January 13, 2022, the Canadian government issued a legislation which in practice made it impossible for truck drivers to continue doing their job if they weren’t ‘fully vaccinated’.[5]

What happened next filled me with hope. In sharp contrast with the campaign to make the ‘non-vaccinated’ the scapegoats of the worldwide pandemic situation, the vaccinated Canadian truck drivers showed solidarity towards their non-vaccinated colleagues by supporting them in their protest against this legislation. In brotherly collaboration they started what has become known as the Freedom Convoy.[6] And what was even more: many ordinary citizens, both vaccinated and non-vaccinated, started to support the truck driver protests! Canadian prime minister Justin Trudeau and his cabinet, on the other hand, did their utmost to thwart the uprising. Their main argument was that the Freedom Convoy movement was damaging the Canadian economy. This argument, however, doesn’t seem to make sense[7], especially in the light of the damage that governments worldwide are currently inflicting on the world economy, by printing ever more fiat money like crazy, spending it in very questionable ways, driving up gas, fuel and electricity prices to impossible heights, steering toward hyperinflation, etc. This worldwide destructive policy is so consistent that it appears more purposeful than random. Indeed Klaus Schwab, leader of the World Economic Forum, is very open about it that the destruction of the middle class is one of the goals of his institution[8], and he is also very open about the fact that many so-called ‘Young Global Leaders’, among whom Justin Trudeau, have ‘infiltrated’ cabinets all over the world, in order to push the World Economic Forum’s agenda. In Schwab’s own words: ‘We penetrate the cabinets.’ (…) [About Trudeau:] ‘And I know that (…) even more than half of his cabinet are actually Young Global Leaders of the World Economic Forum.’[9]

It is my firm belief that the actual reason why the Canadian government was hell-bent on thwarting the Freedom Convoy uprising had nothing to do with protecting the economy and everything to do with the growing fraternization of the Canadian population. In order to push an agenda as destructive as the World Economic Forum’s Great Reset [10]agenda, it is vital to ‘divide and conquer’, as the saying goes, and the type of fraternization that the Freedom Convoy brought about, went against this. In my view, this was the actual reason why the global policymakers felt so strongly that something had to do done about it. In doing so, by framing and shaming, and by issuing ever more absurd legislations, they eventually felt compelled to resort to brutal violence, whereby the last remnants of their masks of friendliness and care for ‘their’ citizens fell off.

Indeed it is also my firm belief that in fraternization lies the way out of the problems that we, ordinary citizens of the world, are confronted with in this crucially important phase of the history of humankind. As a composer, I feel called to contribute to this, and it is for this reason that I wrote this composition, inspired by the Canadian Freedom Convoy protest and by the events that unfolded as a result, and entitled it Toward Freedom.

The composition is in the form of a mix between a symphonic poem in several ‘stanzas’ and a variation form ending with a fugue, depicting how the two parties involved – the government vs. the people – react to each other, to and fro. The heart-warming fraternization that the Freedom Convoy has brought about, has led me to insert Beethoven’s famous melody to Schiller’s Ode an die Freude / Alle Menschen werden Brüder (Ode to Joy / All Men will Become Brothers) into the piece. In addition, I made use of elements from the Canadian national anthem  O Canada. Furthermore, halfway the composition appears a motive that originates from an earlier composition, called Vita Aeterna Variations and symbolizing positive karma.[11] It emerges triumphant in the last movement and the piece closes with it. Finally, I wanted to express that the fraternization that the citizens of Canada have shown is an example for the rest the world that here lies the solution to stop the plans that the globalists and their World Economic Forum have with humanity. I therefore reshaped the Canadian national anthem into an anthem for the world, to lyrics by Franz K. Custos; to whom I turned, as usual since the outbreak of the pandemic in 2020, with the request to provide me with lyrics; and to which he kindly obliged, as usual.

The composition consists of twelve movements (stanzas) that flow into one another without breaks. Here follows a description of each of these movements: 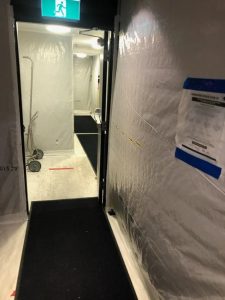 I. Introduction: Under the Yoke [12]
A depiction of a bleak atmosphere of suppression, under the guise of ‘prioritizing the health and safety of citizens’. Central theme is a melody derived from ‘O, Canada’, Canada’s national anthem.

II. Announcement: Crossing a Borderline[13]
Scroll down for the lyrics. Needless to say that the title is also meant in the sense of ‘going too far’. 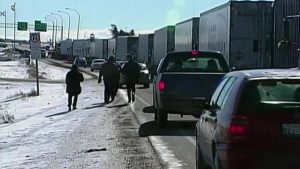 IV. Framing and Shaming[15]
The Alle Menschen werden Brüder theme is ridiculed, while the O Canada motive is wrapped in a cloak of cheap seduction.

V. Charity[16]
A merging of Beethoven’s melody with the O Canada motive symbolizes the people’s willingness to help by donating. Halfway this ‘stanza’ the Vita Aeterna motive, symbolizing positive karma, appears for the first time.

VI. Announcement: Freezing of Accounts[17]
See lyrics on page 5. The discrepancy between the intention to ‘prioritize the health and safety of citizens’ and the new legislation now becomes apparent. 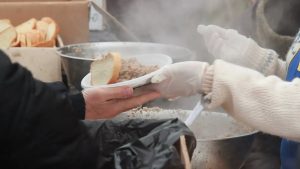 VII. ‘Material Aid’[18]
The Vita Aeterna, the O Canada and the Alle Mensche warden Brüder motives, all together in a tender triple counterpoint.

VIII. Announcement: Arrests[19]
See lyrics on page 5. The discrepancy between the intention to ‘prioritize the health and safety of citizens’ and the new legislation now takes on surreal proportions. 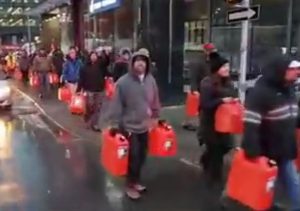 IX. March with Empty Jerry Cans [20]
When the government had descended to the level of making things like carrying jerry cans filled with fuel punishable by law, people started walking the streets with empty jerry cans, thereby making use of one of the mightiest weapons that humanity has at its disposal: humor. Beethoven’s theme, in the shape that he used in the scherzo from the finale of his ninth symphony, is now in counterpoint with the O Canada motive, now reshaped into the global anthem melody that will conclude the composition. 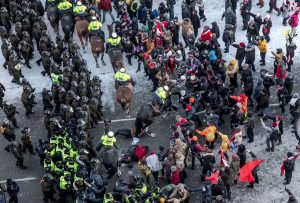 X. Brute Force [21]
Time and time again, history has shown that the one thing that totalitarian systems can’t stand is humor. So, now the government descends to the level of brute force and it violently crushes the Freedom Convoy movement. It doing so, the noble O Canada motive is besmirched.

XI. Despondency
This ‘stanza’ can be subdivided into three parts: a depiction of a desolate battlefield after a battle, an expression of grief, and finally a return to the somber atmosphere of the opening stanza. 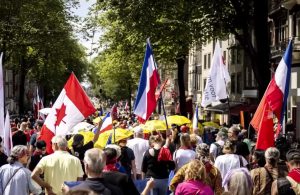 XII. Finale: Ode an die Freiheit (Ode to Freedom)
To keep a tyrannical system in place, people must be convinced that the system is there for their own good. This means that by descending to a level of brute violence, a totalitarian regime in fact signs its own death warrant, in the long run. Time and again, history has shown this, and the globalists know it.
This stanza starts off with a lonely fugue theme, getting stronger and more lively as time goes by, and then being joined by the Vita Aeterna, the O Canada and the Alle Menschen warden Brüder themes respectively. The movement culminates first into a jubilant merging of the Alle Menschen werden Brüder and the O Canada themes, and finally into the global anthem, the melody of which had already appeared in the ninth movement.

Writing this composition has been made possible thanks to a grant from the Dutch Fonds voor de Podiumkunsten (Fund for Podium Arts), for which I would like to express my sincere gratitude.

[1] https://wnl.tv/2021/03/08/de-jonge-nul-begrip-voor-mensen-die-coronaprik-weigeren/
[2] https://www.francetvinfo.fr/sante/maladie/coronavirus/pass-sanitaire/video-emmerder-les-non-vaccines-la-phrase-d-emmanuel-macron-remise-dans-son-contexte_4905605.html
[3] https://thepostmillennial.com/flashback-video-resurfaces-of-trudeau-calling-anti-vaxxers-racists-and-misogynists
[4] In contrast with all these and similar accusations, I have never contracted Covid, nor have I been ill otherwise, nor have I infected anyone, since March 2020 (and before that); this in spite of (or thanks to?) the fact that I have never worn medicinal masks and have never undergone any PCR test.
[5] https://www.canada.ca/en/public-health/news/2022/01/requirements-for-truckers-entering-canada-in-effect-as-of-january-15-2022.html
[6] For a description of events, names and chronological order (albeit a rather biased one), see https://en.wikipedia.org/wiki/Canada_convoy_protest.
[7] For general information about Trudeau and his influence on the Canadian economy, see Jordan Peterson – How Justin Trudeau Destroyed Canada’s Economic Future: https://www.youtube.com/watch?v=FrqWUiXDNzQ.
[8] See for instance Der Mittelstand muß weg: https://twitter.com/TheNeedle10/status/1570255141160497152, where Klaus Schwab openly declares that the middle class will have to go, that the rich will profit from this and that the poor will be the losers. See also these statements by Yuval Harari, spokespersons of the WEF policies: https://rumble.com/search/video?q=harari%20human%20hackable%20animals.
[9] One can hear him say this, and more remarkable things, here: https://www.youtube.com/watch?v=daE0jthD5F8
[10] Also called Build Back Better, Agenda 21, Agenda 30, or New World Order
[11] Personally, I call this motive the Walter motive, since it refers to the Austrian Naturheiler (natural healer) Walter Saler, one of the kindest persons I have had the privilege of meeting.
[12] See for instance https://www.forbes.com/sites/sandramacgregor/2021/05/20/over-75-of-canadians-may-need-to-be-vaccinated-before-canada-us-border-reopens/?sh=40f8ed6edfec.
[13] https://www.canada.ca/en/public-health/news/2022/01/requirements-for-truckers-entering-canada-in-effect-as-of-january-15-2022.html
[14] See https://www.reuters.com/markets/commodities/canada-resists-pressure-drop-vaccine-mandate-cross-border-truckers-2022-01-09.
[15] See for instance this article about Tamara Lich, one of the organizers of the Freedom Convoy: https://www.canada.ca/en/public-health/news/2022/01/requirements-for-truckers-entering-canada-in-effect-as-of-january-15-2022.html.
[16] As the abovementioned Wikipedia article correctly states, several initiatives were started to provide the protesting truck drivers with money they needed for being able to continue their protest, among which a GoFundMe campaign.
[17] See for instance https://www.lifesitenews.com/news/trudeau-govt-confirms-canadian-banks-have-started-freezing-accounts-of-freedom-convoy-protesters/ & https://www.youtube.com/watch?v=_4I9Rz_g6pU (Freeland says some protesters’ bank accounts frozen). This was made possible by invoking a so-called ‘Emergencies Act’: https://globalnews.ca/news/8617952/canada-convoy-blockade-military-response/. An unprecedented move by Trudeau and his government.
[18] Apart from food and water, the protesting truck drivers were provided with much needed fuel to keep warm, considering the freezing cold.
[19] See for instance https://www.eduarddeboer.org/o-canada-links-en-teksten, video 3.
[20] See https://www.goyimtv.tv/v/1124483593/Ottawa-residents-carry-empty-gas-cans-to-throw-off-police & https://www.eduarddeboer.org/o-canada-links-en-teksten, video 7.
[21] See for instance https://www.eduarddeboer.org/o-canada-links-en-teksten, videos 4, 5 & 6.

[1] Cf. https://www.canada.ca/en/public-health/news/2021/11/government-of-canada-announces-adjustments-to-canadas-border-measures.html.
[2] Cf. https://www.canada.ca/en/public-health/news/2022/01/requirements-for-truckers-entering-canada-in-effect-as-of-january-15-2022.html.
[3] Cf. https://www.canada.ca/en/public-health/news/2021/11/government-of-canada-announces-adjustments-to-canadas-border-measures.html.
[4] See https://www.thestar.com/news/canada/2022/02/14/full-text-of-chrystia-freelands-remarks-during-emergencies-act-announcement.html.
[5] See https://www.msn.com/en-ca/news/canada/we-will-actively-look-to-identify-you-ottawa-police-chief-warns-departed-protesters/ar-AAU6AhW.
[6] Franz K. Custos has added this to his lyrics, as to makes it clear to audiences what the fuel was intended for and why it was so important for the truck drivers to have fuel.
[7] See https://thepostmillennial.com/breaking-ottawa-police-threaten-to-arrest-anyone-providing-material-support-to-freedom-convoy.
[8] To be sung at this moment in time.
[9] To be sung at some point in the future.