Toward Forgiveness, for symphony orchestra, Op. 98 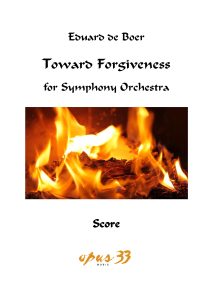 This composition has been derived from a piece for fanfare orchestra that I wrote in 2019, entitled Via ad Veniam (Road to Forgiveness). In 2021, one year into the outbreak of the coronavirus situation, I wrote the opera The Method of Doctor Tarr and Professor Fether, a free adaptation of a short story by Edgar Allan Poe, that deals with this subject. Toward the end of its second act, nurse Angelica willingly consents to ‘taking the vaccine’, not for herself, but ‘for the others’, as to reduce the risk of infecting other people. Immediately after having been inoculated, she collapses and starts to convulse violently, and she is rushed to hospital at the close of curtain. In the third act, she makes a dramatic reappearance, in a wheelchair, paralysed on one side[1], and gives an account of the process that she went through, eventually having reached the stage where she can accept what has happened to her. For the aria in which she does so, I re-used the earlier composition Via ad Veniam, and I simultaneously transformed it into this score.

The composition is based on two medieval melodies from the Carmina Burana Codex, namely Procurans Odium

The first song text is about the fact that injustice, when done, often turns out to be a blessing in disguise eventually; the second one is about stabilitas, steadfastness, not letting oneself be diverted from one’s path, no matter what. With this as a starting point, this composition musically depicts all kinds of stages, from the darkness that accompanies wrong-doing to its ultimate acceptance and release. The eight parts in total all merge into one another. Here is a concise overview: