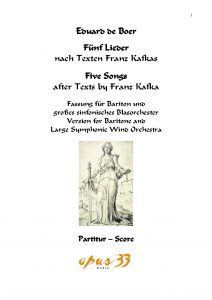 This song cycle could be composed thanks to a contribution called Werkbijdrage Muziekauteur (Work Contribution Music Author) of the Dutch Fonds voor de Podiumkunsten (Fund for the Podium Arts).

Dedicated to Wind Orchestra Concordia Obbicht and their conductor Alex Schillings, and to Sabine McNeill

The first performance should have taken place March 27, 2020 in the Sint Willibrorduskerk, Obbicht, The Netherlands. Unfortunately, the pandemic situation has caused the premiere to be postponed.

Many stories of the famous writer Franz Kafka deal with the anxiety, alienation and powerlessness of an individual against a nonsensical, blind authority. His surreal stories have even resulted in the emergence of the word Kafkaesque, to describe the absurdity of what happens to such an individual and the hopelessness of his situation. For this song cycle, I searched Kafka’s oeuvre for texts fitting the situation of a so-called whistleblower: an informant who exposes wrongdoing, mostly within the organisation where he or she is working, in the hope of stopping it.

I know what it feels like to be a whistleblower, as I have been one myself, in the 90s of the previous century. This had to do with the predecessor of the Dutch state fund which enabled me to write this composition. It was called Fonds voor de Scheppende Toonkunst, which roughly translates as Fund for the Creation of Music. Research and analysis of this fund’s annual reports led me to the conclusion that the composers who received most of the (public) funding were largely the same ones as could be found in the management board and / or in the advisory committees. And on top this, the composers in the board had a say in which composer would be asked to take part in the advisory committee to decide about the next round of applications. When my findings went public, I went through the ordeal that whistleblowers usually go through, and this isn’t the place to go into detail about this. Suffice it to say that this experience resulted in compositions like the secular oratorio Der Förderverein, the third part of my choral song cycle Cantica Aviditatis and my ‘conceptual experiment’ Bubbles.

This story pales into insignificance compared to what happened to one of the dedicatees of this composition and the dedicatee of its version for baritone and piano: the 74 year old German / British mathematician and human rights campaigner Sabine McNeill, who at this moment is imprisoned for exposing systemic child abuse within the U.K. She can be viewed on Youtube, speaking in the EU Parliament about this theme.

That systemic child abuse and child trafficking is rampant, not just in the U.K., but all over the globe, especially within circles of the highest power, is something that few people want to know or even think about. Most people prefer to look the other way. A few years ago, I came to the conclusion that, being a composer, I can contribute to spreading awareness of this phenomenon by writing compositions about it. So far, however, such compositions have hardly been performed or not at all. But never mind, this composition is the next one in the series. And helping spread awareness about these abhorrent practices is necessary in order to make them stop.

In the preface to the score of Coming to Light, one of these earlier compositions, I added a number of Youtube links to prove my point. However, more and more of the Youtube films in question are now being taken down – only to be replaced by more and more new ones, by the way – rendering the links I provided useless. All the more happy am I with the foundation in 2015 of the International Tribunal for Natural Justice I.T.N.J., a judicial commission of inquiry into human trafficking and child sex abuse. I invite everyone who wants to know more about (the depth of) this rabbit hole simply to search for ITNJ on Youtube and experience the cumulative effect of the large and growing number of testimonies.

To return to this song cycle, it describes various occurrences that may happen to a whistleblower and his / her ensuing states of mind:

I: Die Verhaftung (The Arrest). A whistleblower may be arrested, on sometimes trumped-up charges. The text is from the beginning of Kafka’s famous novel Der Prozess (The Trail) and the absurdity of the conversation is underlined by the bizarre waltz that follows it.

II: Gruppenverhalten (Group Behaviour). In many cases, a whistleblower is fired, while his / her colleagues prefer to look the other way. I took the liberty to ‘borrow’ the Leitmotiv of the ‘small evil’ from Prokofiev’s opera The Fiery Angel to depict the usurper helmsman.

III. Erlösung in einem Traum (Salvation in a Dream) is about yearning for death, under the pressure of the circumstances.

IV: Weg von hier! (Away from here!) in this musical setting is about the urge to fly from the circumstances that blowing a whistle can bring about. This song is followed by a postlude depicting a thunderstorm, not unlike the one that Shakespeare described so beautifully in his play King Lear.

V: Nach dem Gewitter (After the Thunderstorm). I couldn’t resist the temptation to end this cycle on a positive note, with a musical setting of the only positive and self-asserting text that I could find in Kafka’s oeuvre – admittedly the short story where this text has been taken from ends with the collapse of the protagonist’s exuberant feeling, but Kafka did write these lines nonetheless – as I feel that we are living in times of transformation, where human consciousness is gradually growing and ever more is coming to light. May the endeavours of Sabine McNeill and many others contribute to this expansion, and may also this little musical offering help with this.

There is also a version for baritone and piano, Op. 86. The beginning of this version, including the texts I selected and set to music, can be viewed here.